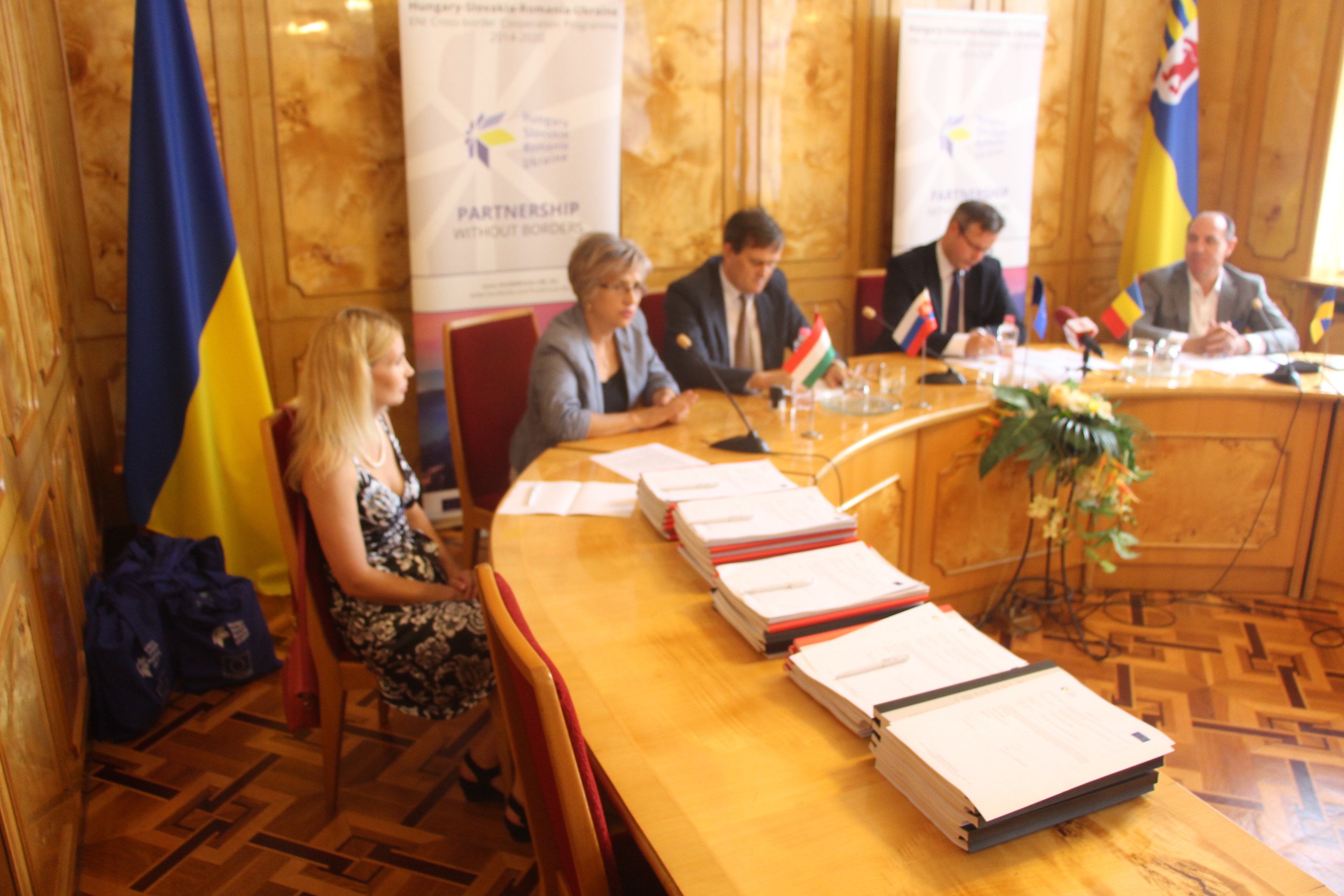 The Joint Technical Secretariat organised on 28-29 August 2019 in four participating countries a series of contract signing ceremonies for 10 cross-border cooperation projects that began implementation on 1 September 2019. The 10 projects with a total EU allocation of EUR 8.4 million were awarded in the 2nd Call for Proposals in 5 priorities of the Programme.

In Košice, two grant contracts were signed by lead beneficiaries. 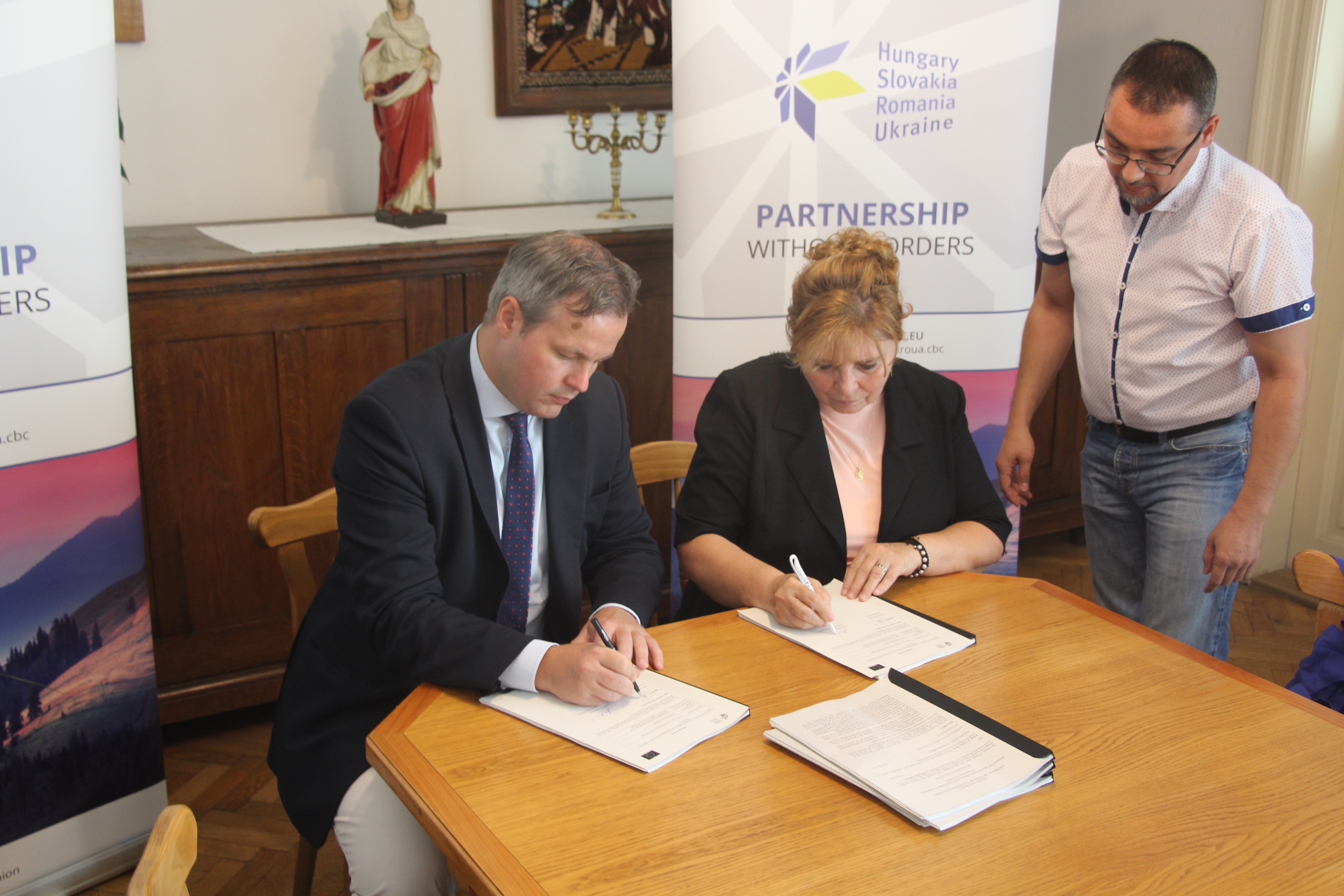 The project “Restore your common history and cultural heritage” with an EU allocation of EUR 944,589 will be implemented during 36 months by the NGO “Pearls of Gothic Route” in partnership with the Greek Catholic Eparchy of Mukachevo. The project partners will reconstruct and restorate two significant monuments of the region: St. Urban’s Tower in Košice and Greek-Catholic Cathedral in Uzghorod. 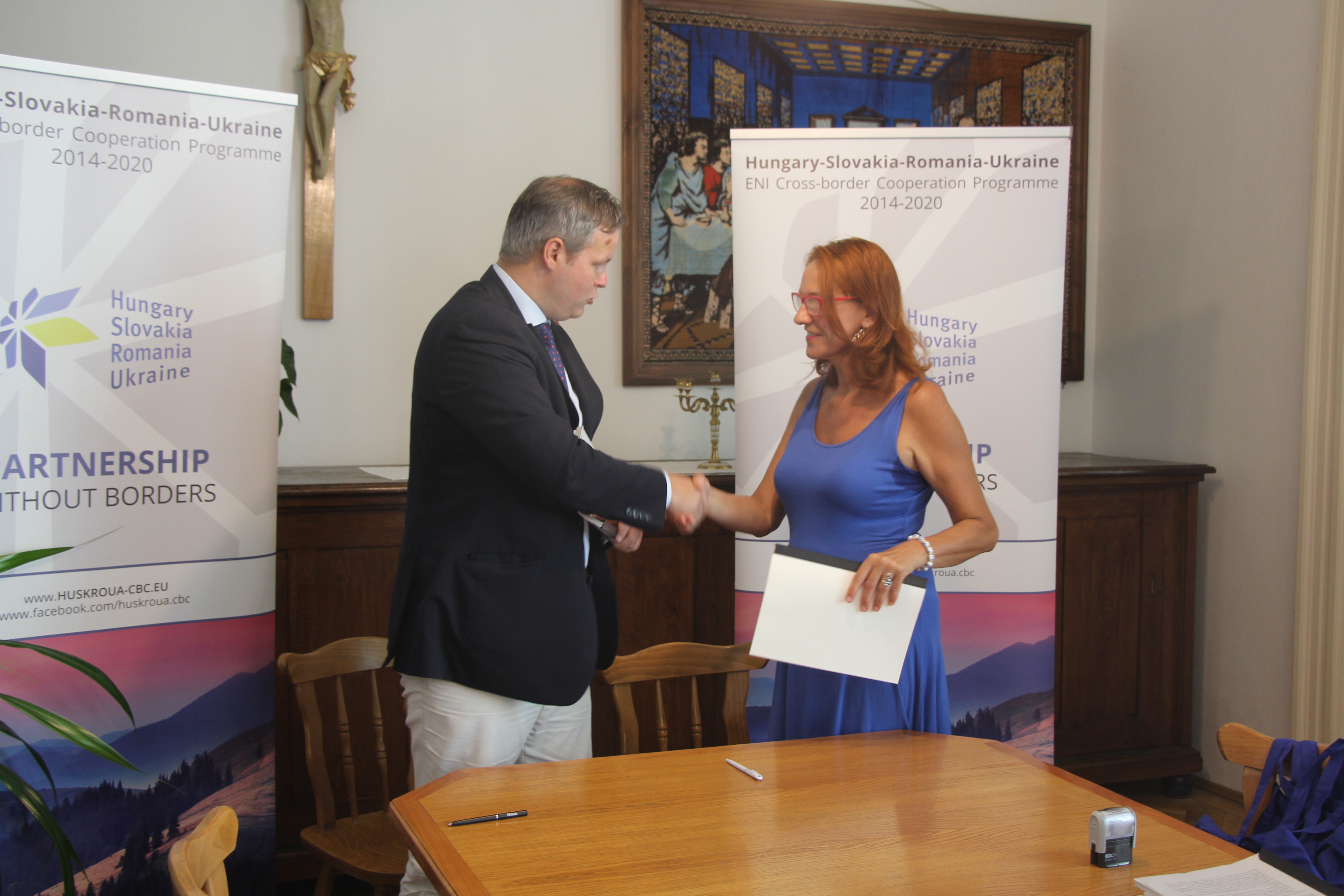 In Nyíregyháza, another two grant contracts were signed by lead beneficiaries. 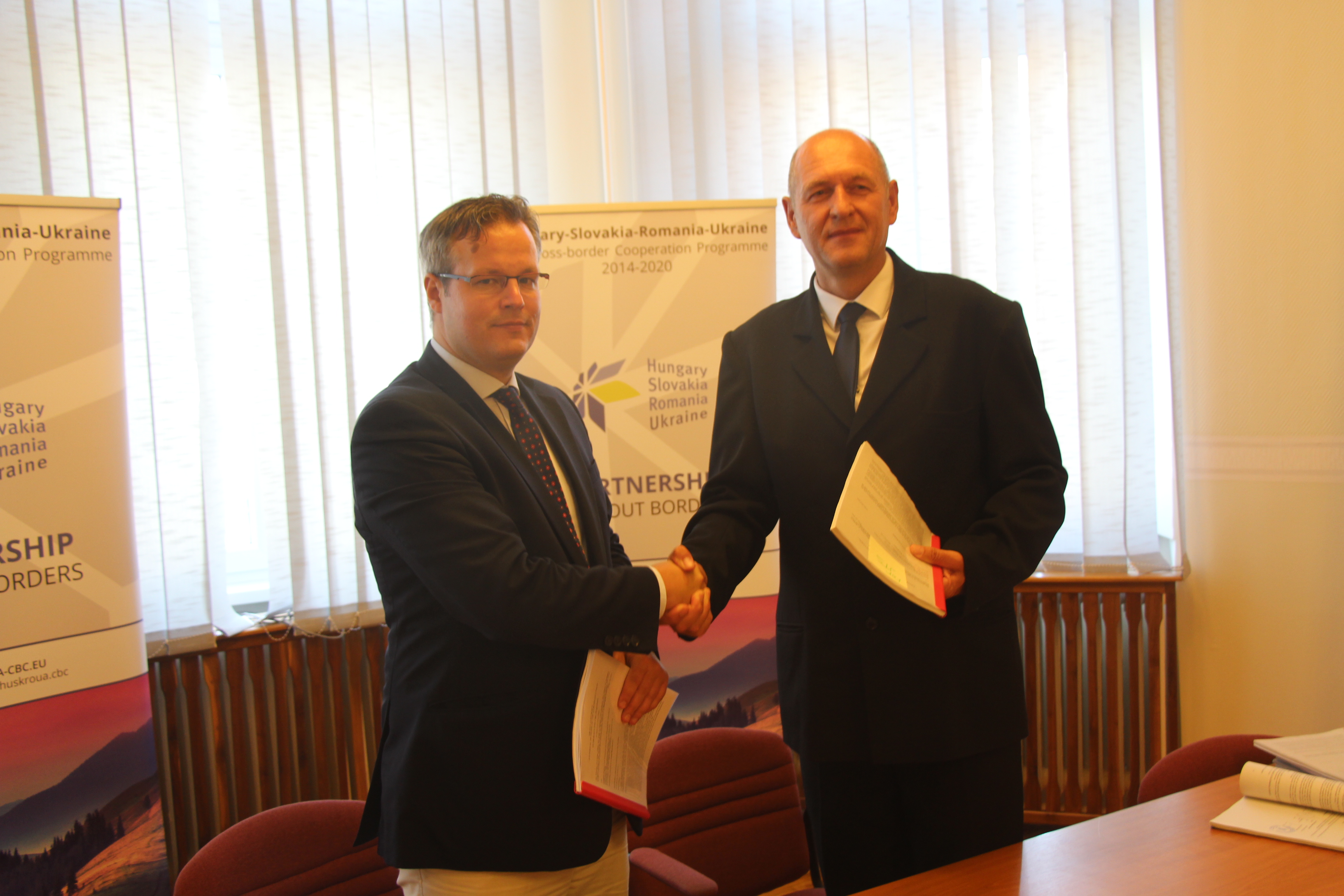 The CODEVDIC project (“Common Development of Volunteer Disaster Intervention Capability”) with an EU allocation of EUR 847,630 will be implemented during 24 months by the Zemplén Region Civil Protection and Disaster Management Association in partnership with the Volunteer Firefighter Association Pálháza, Municipality of Kráľovský Chlmec, Town of Seini, Babeş-Bolyai University and the Transcarpathian Reformed Church. The project partners will develop a complex, innovative, local level disaster intervention recovery logistics and prevention system on the most endangered segment of the HU-SK-RO-UA border area. 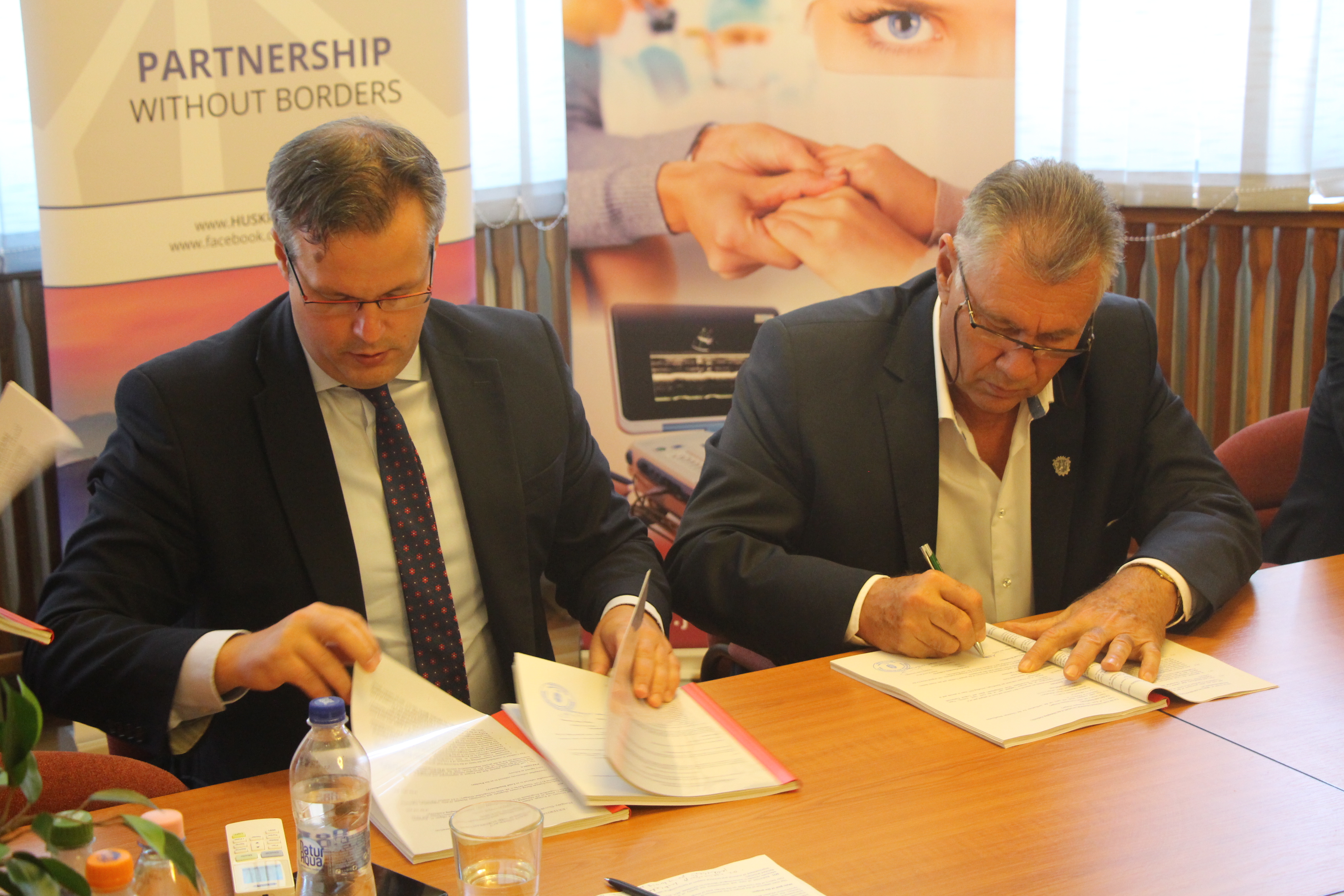 The IDHB project (“Infectious diseases have no borders”) with an EU allocation of EUR 998,798 will be implemented during 24 months by the Szabolcs-Szatmár-Bereg County Hospitals and University Hospital in partnership with the Regional Children’s Hospital from Mukachevo and the Clinical Infectious Hospital from Uzhhorod. The project partners will improve the infrastructure and equipment of infectious departments in three hospitals by modernising, constructing and equipping bacteriological laboratories, assembling disinfecting facilities, repairing water supply system, sewerage and premises, equipping intensive care ward.

In Satu Mare, a grant contract was signed with Tarna Mare Commune. 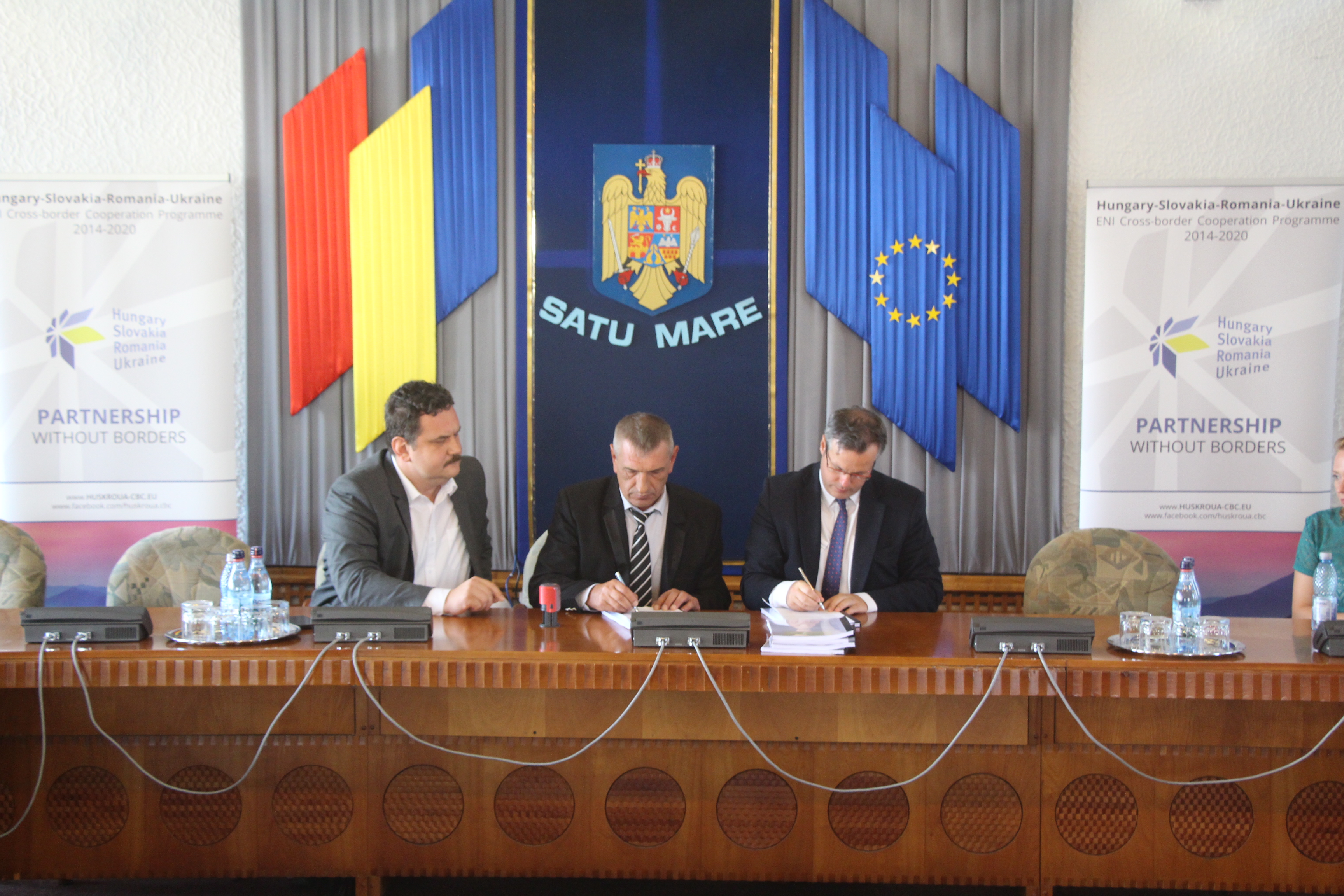 In Uzhhorod, 5 grant contracts were signed by lead beneficiaries. 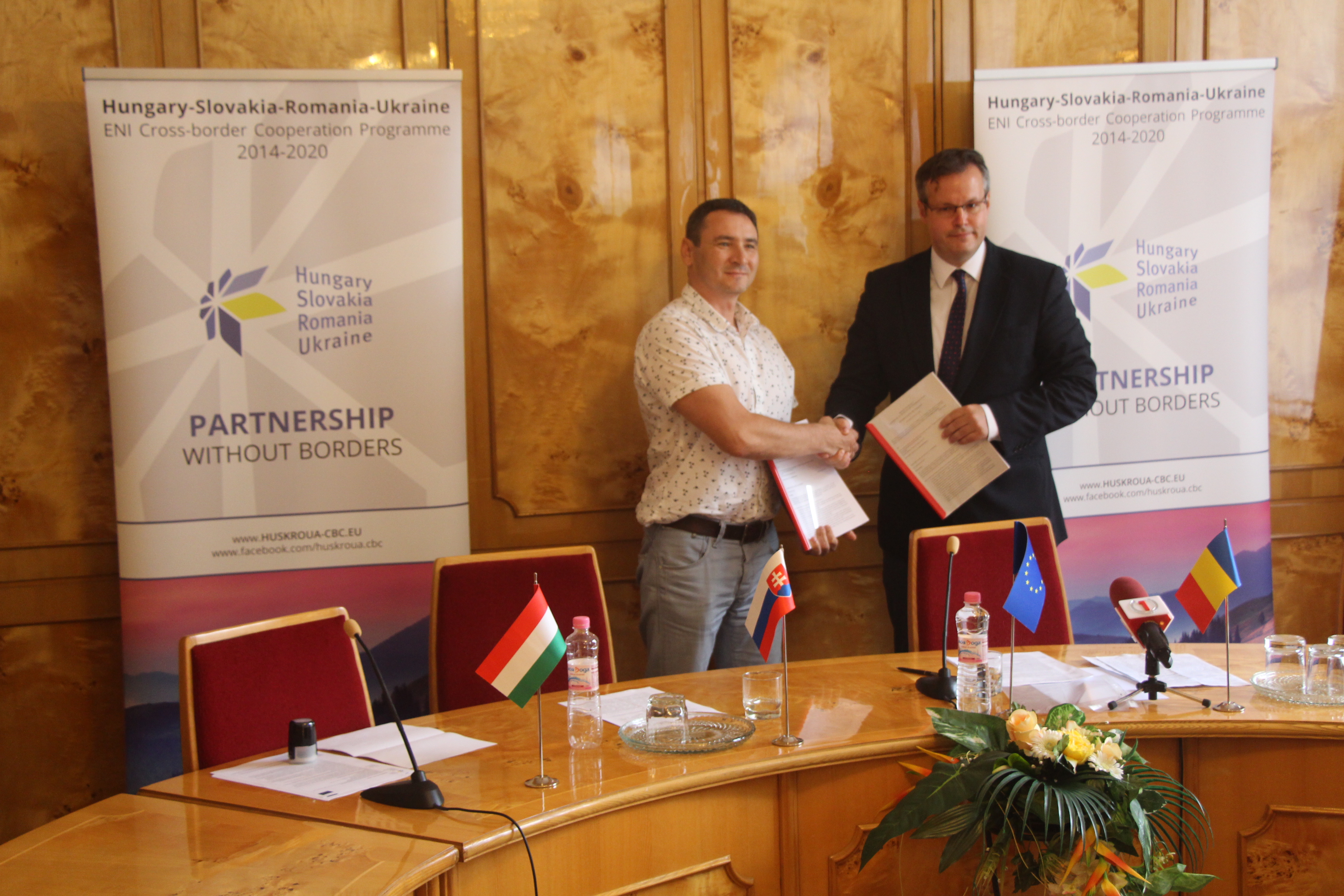 The SmartMuseum project (“SmartMuseum as a way to present cultural heritage”) with an EU allocation of EUR 721,501 will be implemented during 24 months by the Association “Uzhgorod – 21st century” in partnership with the Mukachevo Historical Museum, Košice Self-governing Region, Agency for the Support of Regional Development Košice, Herman Otto Museum, and the Castle Stewardship of Füzér. The project partners will renovate the emergency part of Palanok Castle, offer SMART solutions in presenting cultural and historical heritage to 6 historical/cultural sites; develop interactive tourist attractions based on smart technologies at the target historical sites; digitise exhibits of the targeted museums; train museum staff and promote cross border the 6 historical/cultural sites. 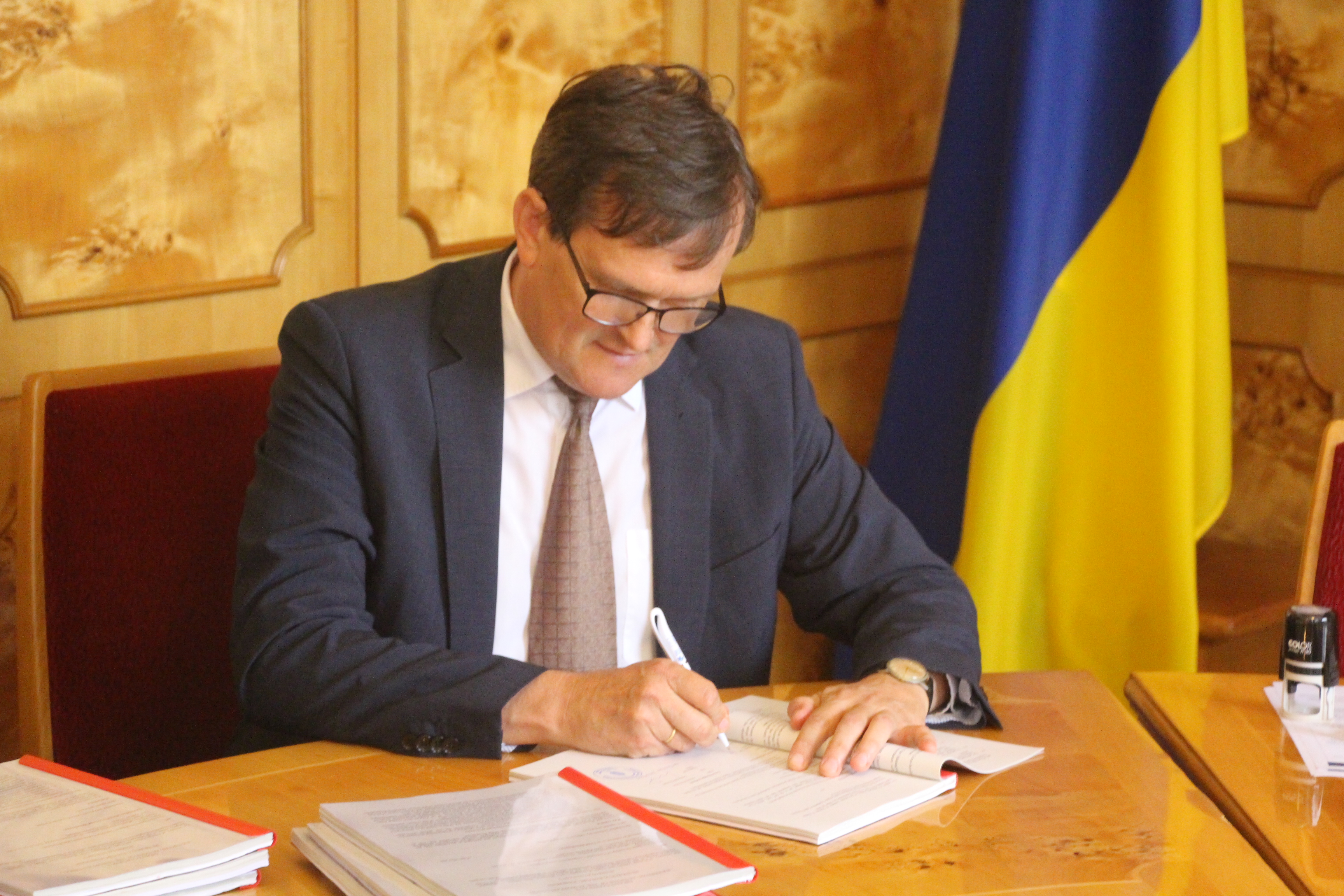 The REVITAL I project (“Environmental Assessment for Natural Resources Revitalization in Solotvyno to prevent the further pollution of the Upper-Tisza Basin through the preparation of a complex monitoring system”) with an EU allocation of EUR 968,235 will be implemented during 24 months by the Tisza EGTC in partnership with the University of Miskolc, Solotvyno City Hall, Municipality of Sighetu Marmației, Technical University of Košice and the Institute of Geological Sciences of the National Academy of Sciences of Ukraine. The project partners aim to reduce the pollution and preserve natural resources of the River Tisza by the revitalisation of the Solotvyno Salt Mine area and surroundings through data collection and knowledge base establishment through surveys and innovative activities (geological, geomorphologic, hydrogeological, structural and hydrological). 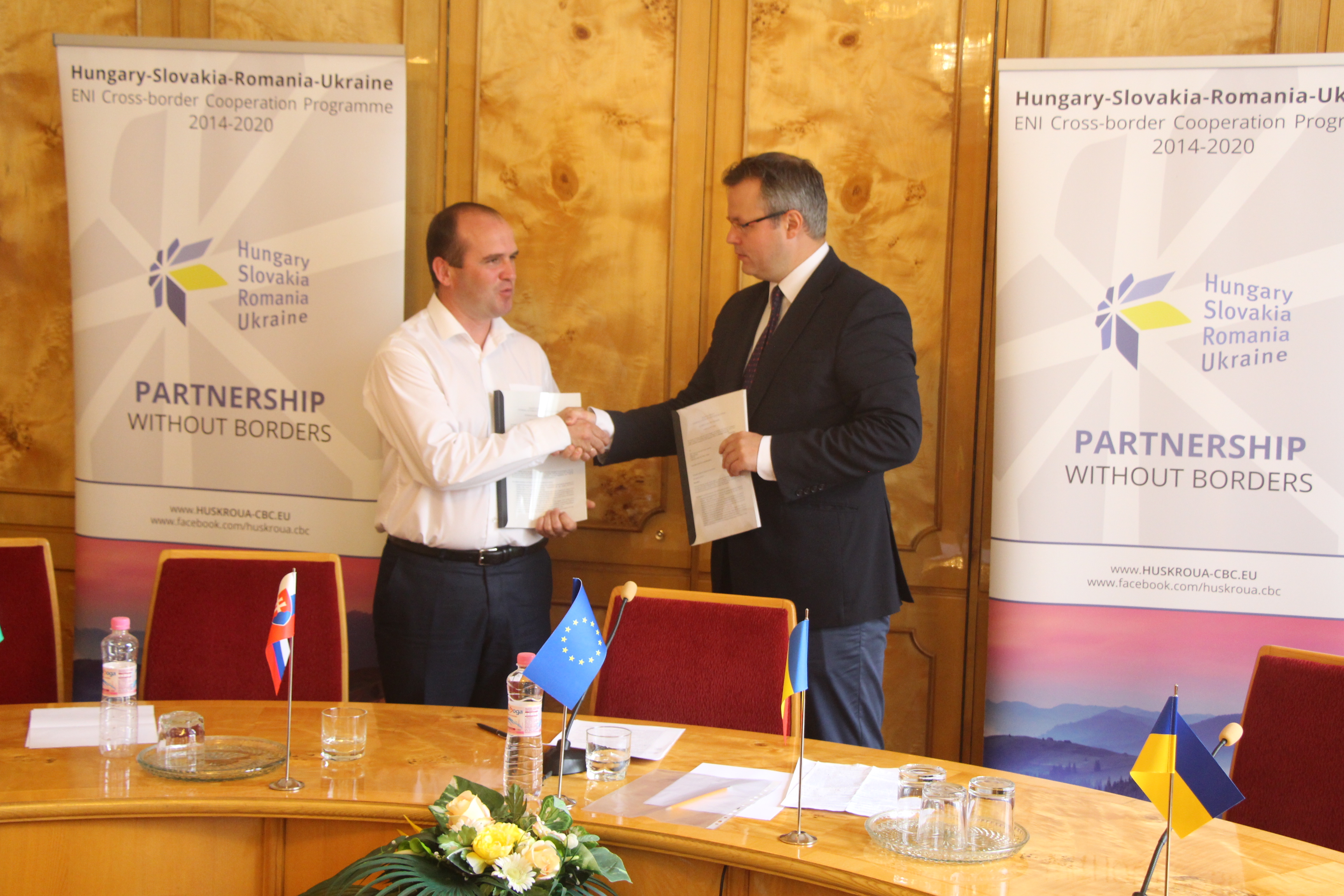 The BikeAcceNT project (“Bike AcceNT: Bicycle Accessibility Networking Territories”) with an EU allocation of EUR 323,604 will be implemented during 24 months by the Center for Social and Business Initiatives from Yaremche in partnership with the Prešov Bicycle Group Boneshaker, Agency for sustainable development of the Carpathian region “FORZA” and the Ptrukša Village. The project partners will reconstruct and upgrade 20 km of key bicycle path at the border; prepare spatial planning and technical documents for cycling infrastructure;  organise 28 awareness raising cross-border events for cyclists. 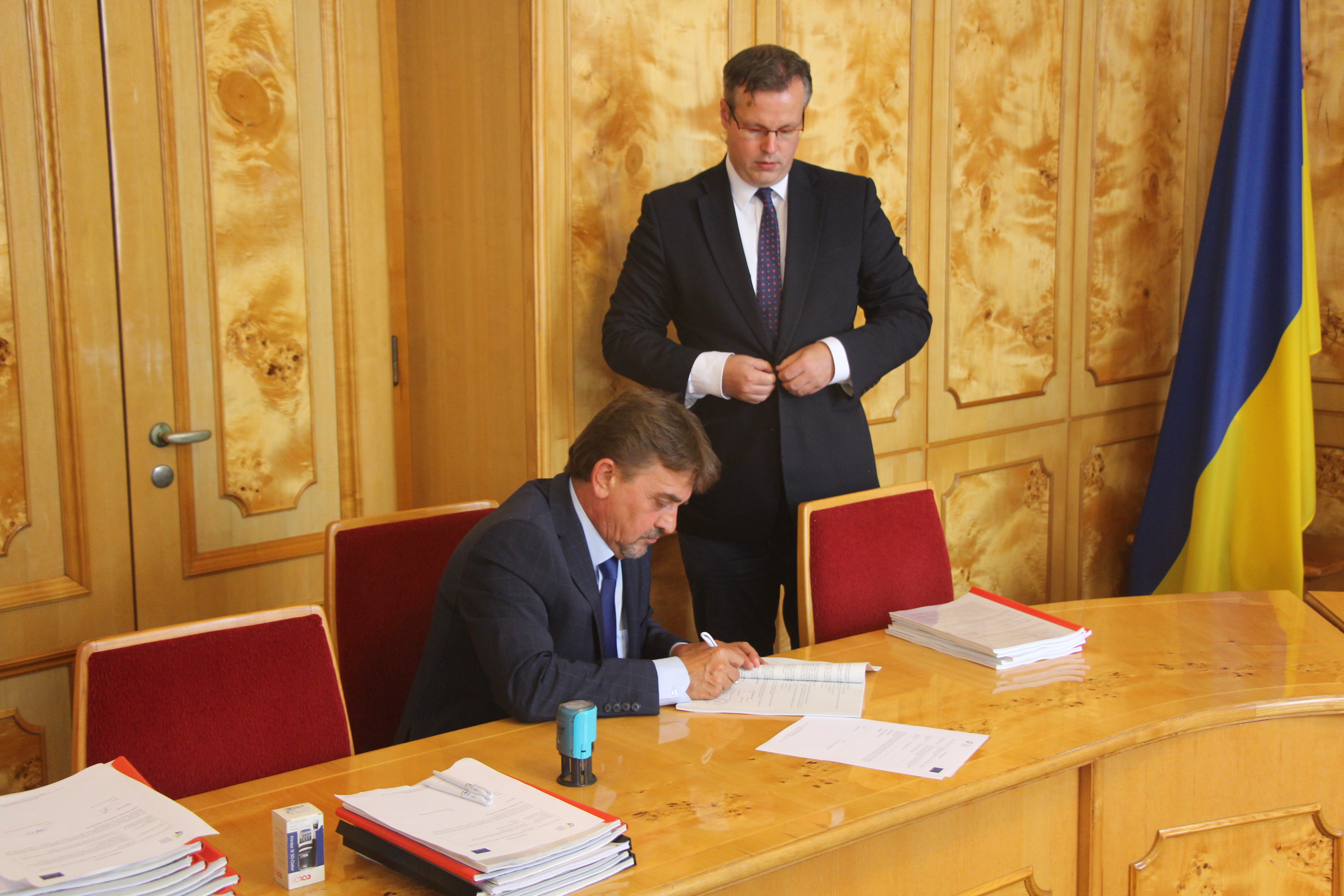 The project “Overcoming barriers: improving the mobility of residents of the border region of Transcarpathia (Ukraine), Maramures (Romania) and Szabolcs-Szatmar-Bereg (Hungary)” with an EU allocation of EUR 1,332,309 will be implemented during 24 months by the Vynohradiv City Council in partnership with the Maramureş County Council, Municipality of Barabás and the Center of Investment and Development from Vynohradiv. The project partners will improve the access to the borders by reconstructing and modernising the road infrastructure with bicycle paths in the city centre of Vynohradiv, improving the public transport structure in Maramureş County, creating recreation area for drivers in Barabás. 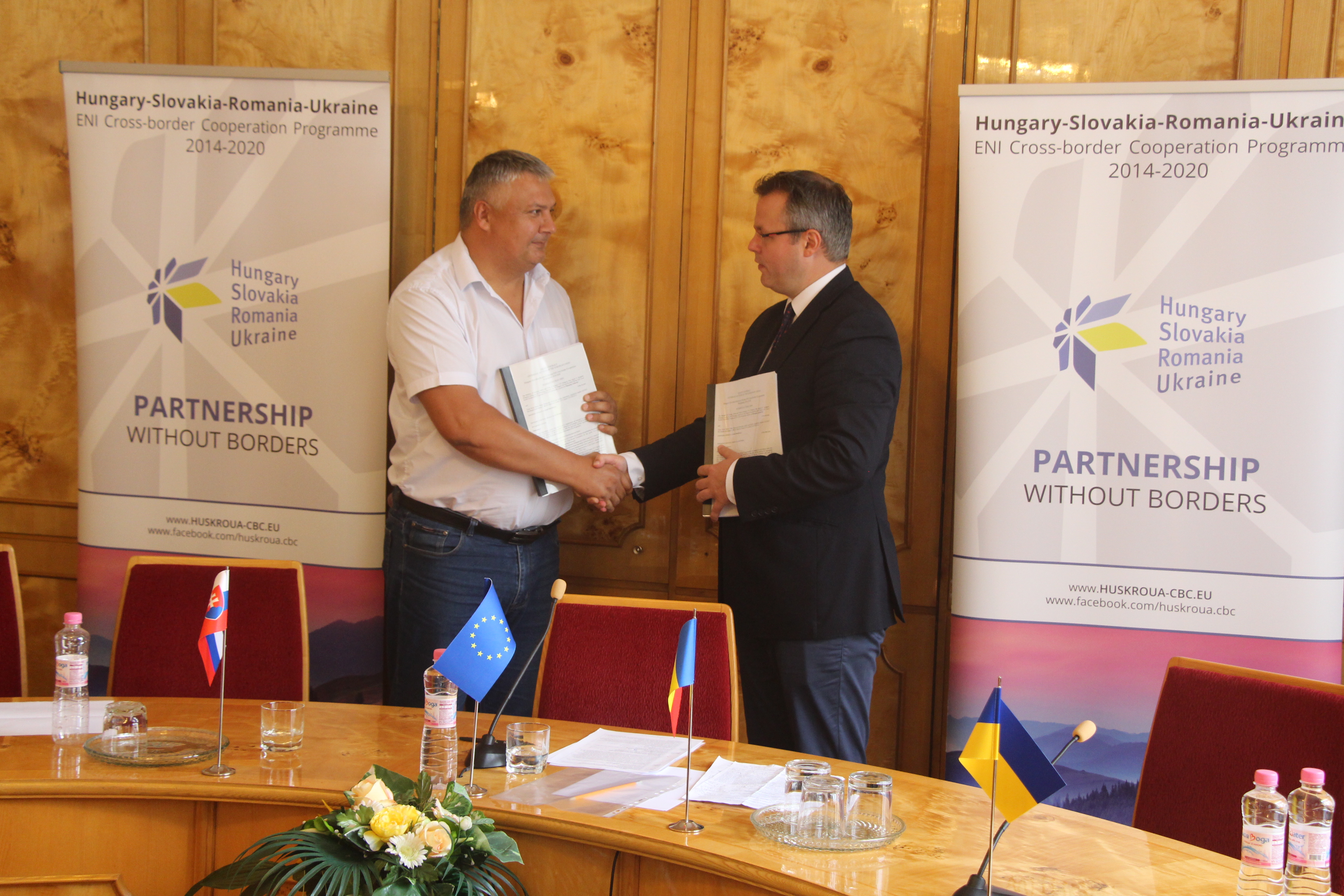 The FloodUZH project (“Joint activities for the prevention of natural disasters in the transboundary Uzh river basin”) with an EU allocation of EUR 1,034,196 will be implemented during 36 months by the Tisza River Basin Water Resources Directorate in partnership with the Slovak Water Management Enterprise, Uzhhorod Interrayon Department of Water Management, Uzhhorod City Council and the Public organization “Ekosfera”. The project partners will develop design documentation on regulating weir construction on the Uzh River and mobile dam application within the city of Uzhhorod in order to decrease the negative flood impact and improve ecological situation in the Uzh River basin and transboundary water sections.

The contracting of the projects awarded in the 1st and 2nd Call for Proposals will continue during September and the grant contracts will be signed during the month with beneficiaries intending to begin implementation later in September or beginning of October 2019.